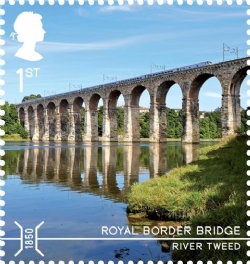 And Royal Mail vans working locally will also carry an image of the stamp.

The Bridges stamp issue is aimed at celebrate the leaps in engineering that have seen the UK's bridges evolve from humble stone crossings to dramatic and symbolic landmarks.

Crossing the River Tweed between Berwick-upon-Tweed and Tweedmouth, the Royal Border Bridge was constructed between 1847 and 1850 to the design of Robert Stephenson and was a key component in Britain's expanding railway system, linking London to Edinburgh.

Of traditional masonry construction, the bridge is essentially a railway viaduct formed of 28 semi-circular-headed arches, each with a span of 18 metres, with the total length of the bridge - including approach works - reaching 658 metres. This vast extent, combined with the majestic 38-metre height of the arches as they cross the river and the slender form of the vertical piers, from which the arches spring, gives the structure a striking elegance. A superb piece of functional engineering, it is also a work of great beauty that compliments the rugged border landscape through which it passes.

Andrew Hammond, Head of Stamps and Collectibles at Royal Mail, said: "The story of Britain's engineering genius can be found in its bridges. These new stamps celebrate ten beautiful and ground-breaking landmarks that span centuries of our history."

Royal Mail will also be issuing a special postmark on 5 March to mark the stamp set along with Royal Mail Vans in each bridge Location carrying an image of the new stamp.